Publishers Note: Never before has Bluerailroad published reviews of a performance by its editor and co-founder Paul Zollo. But as one of his oldest friends, who understands that his music means everything to him,  I insisted. He came around fairly quickly.  Thank you to Richard Klein and Ned Layton for their kind reviews.
–Henry Crinkle, Publisher
Atuona, Hiva ‘Oa, French Polynesia

It was my first opportunity to see Paul perform in person. Chicago was truly the beneficiary last night. Surrounded by family, friends, fans, it felt like you were invited to someone’s home and at a most congenial party. Martyrs was a fine venue; good seating and hearing from almost any seat. Paul sings — mostly original songs, tells stories both in song and anecdote, shares with colleagues: with Paul’s niece’s boyfriend Jared Rabin on the violin and mandolin. I’m glad I got a “ear view” Saturday night on the live broadcast [on WFMT’s Folkstage]. But it was a nice prelude to Monday at Martyrs. Well, I don’t want to do is write a review… but what a lovely night. The song may have ended, but the melody lingers on… –Richard Klein

I have his album Orange Avenue and his big book on songwriters [Songwriters On Songwriting], but I’d never seen Paul Zollo perform live. But for the first time in decades, I believe, he returned to my home-town, which is also his home-town, as I discovered. And through a set of mostly beautiful and lyrical originals, including many written with the great Darryl Purpose, he peppered the crowd with funny and poignant anecdotes about growing up in the Chicago area, and learning his craft at local clubs like The Spot in Evanston, and Somebody Else’s Troubles here on Lincoln Ave. The legendary Steve Goodman, he said, gave him his first songwriting lesson, backstage after a concert, when he listened to one of the young Paul’s songs, and told him bluntly that it didn’t make much sense, and he “could have written the whole thing in one line.” It was harsh criticism, Zollo said, but it helped him aim higher – towards that realm where Goodman and Prine and Michael Smith dwell.

And he got there. At Martyrs Monday night, to a packed crowd that seemed more reverent than the usual gang here on rock nights, he sang, with great clarity and heart, songs that touched on a surprising range of topics, from classic songwriters like Muddy Waters and Leiber & Stoller, to Edgar Allen Poe, the legend of Chavez Ravine in Los Angeles, and his love for his son. He also did a song he wrote with another legendary Steve – the late Steve Allen – a beautiful old-fashioned song with “adult chords” that resounded like a lost standard.  Thankfully he performed the beautiful “Being In This World,” which he recorded as a duet with Art Garfunkel on Orange Avenue. Joined onstage by Jared Rabin, a violin-mandolin virtuoso  (the leader of Chicago’s great Falldown), they played as if they had been touring together for years. They did a surprisingly sweet version of John Lennon’s “Help,” slowing down its famous melody to wring pure passion. A funny dark blues erupted, and for the encore a very sweet version of Charlie Chaplin’s “Smile,” on which Rabin soared into an inspired Stephane Grappeli-tinged solo. It was a happy night. Here’s hoping Zollo returns to his home-town more often. — Ned Layton 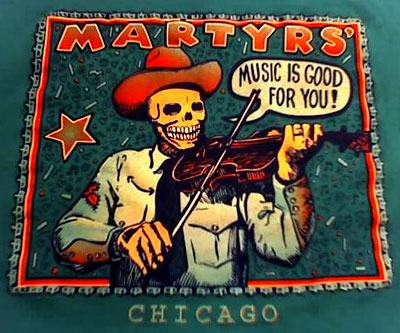