Seeing Rob Zombie and his band at the intimate Roxy on the Sunset Strip is akin to seeing a jet engine rev up and take off in a Starbucks. To behold that much sheer power in such a small space was staggering. Yet it was exhilarating and great, and Rob and the gang seemed to enjoy it as much as the audience. “It is weird playing here,” said Zombie. “Our rehearsal hall is bigger than this place.”

They usually tear into giant concert arenas, and are preparing for a concert tour with Korn this summer (July 24 Irvine Meadows here in Los Angeles), the ostensible reason for this, a voluminous valentine to those lucky fans who got in. It’s the first time he’s played in a club like this, he said, since the baby days of his first band White Zombie. Though the Zombie ensemble has about a fifth of the musicians as Springsteen’s band, it has as much if not more passion and pure, electric rock and roll energy. And it was thrilling to behold. 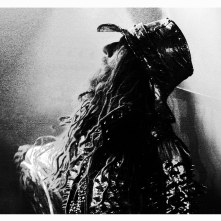 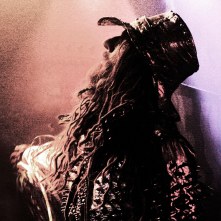 For his is a remarkable band, a quartet that plays together with the precision of an atomic clock, and with the propensity to explode at any moment. The fundamental rock equation of guitar, bass and drums, is locked together with a wild, untamed ferocity. Much of which stems from the fact that John 5 is an extraordinary guitarist, a musician of real multitudes, capable of providing visceral rhythm guitar on every song while simultaneously ripping off savage solos and pyrotechnic fills. With two hands and one guitar he often sounds like two guitarists, if not more. 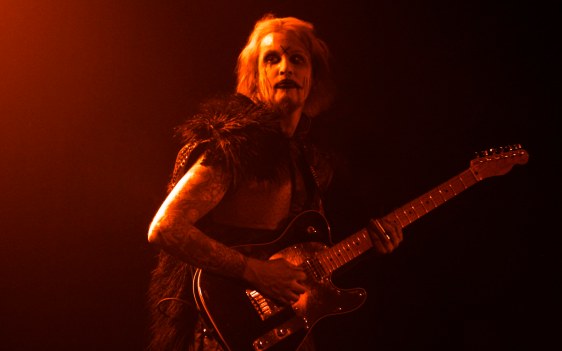 Even before Ginger Fish would kick in with monster beats on the drums, a roar like a jet plane revving would fill the venue and start to swirl; it all came from the arsenal of John 5, who would lift the old club right off of Sunset simply with his left hand voicing partial chords, before his pick hand would slice into the strings and paint with colors so bold and brash it was blinding.

And he’d do this in motion, prowling the stage like a madman swinging his axe, his face often covered by a creepy translucent mask. A young fan in the crowd testified to the effect: “He is the greatest guitarist alive – and also the scariest! He terrifies me!”

Piggy D. laid down rapid-fire, machine-gun blasts of pounding bass with a look of manic glee, stomping around the stage, barely missing clocking front-rowers with the neck of his bass. At one point he came on with a bass fashioned like a crucifix out of weathered wood  from a wrecked raft, and lit it on fire (musically). He and Ginger worked bass and drums together like the supercharged engine of a mad machine, wildly raucous and yet fluidly refined.

Mr. Zombie was on fire all night, spinning like a dervish, resembling a biblical prophet wearing warpaint. He delivered the crowd-pleasing Zombie anthems with deep passion, none so resonant as “Living Dead Girl,” to which the entire audience bounces vertically in beat, singing the refrain. “Dragula” bursts out of that gate propelled by a deep, killer groove, as Ginger and Piggy laid down a rhythmic bed so solid that both Rob and John could rocket off of it, and yet return where they started. It’s a rock and roll lesson in abandon and restraint, as Rob and the electric guitar seem ready to careen off into orbit, while the drums and bass, like gravity, kept them tethered to the earth.

On came special guest Glenn Danzig like he was shot to the stage by a cannon, and with whom Zombie sparred in duet on the Misfit’s “Vampira,” two and a half minutes of pure intensity squared.

At one point Rob asked the crowd for some semblance of sanity, suggesting they all put down their cellphones for a moment to remember what the world was like before we drove over the digital edge. “Just give me five minutes to remember what it was like to be in a club 20 years ago. Learn how to have some fun.”

Though we were in a little club, the crowd didn’t hold back, and occasional moshing led to a few fans being propelled to the stage, where they would do a spastic dance before diving headlong back into the mob, while Rob and the band deftly danced around them.

Rob and crew encored with “Scum of the Earth,” Meet The Creeper, and a song for his wife Sheri Moon Zombie, who was in attendance, “Ging Gang Gong,” which became a final frantic sing-along.

Afterwards the fans, those still standing anyway, seemed stunned. One woman who had eyes wide open as if she had just seen a miracle, testified: “Man! Zombie. Roxy. Man! OH MY GOD!” Yes. That said it all.